When People Are More Than The Ordinary, They Are Javed and Shabana 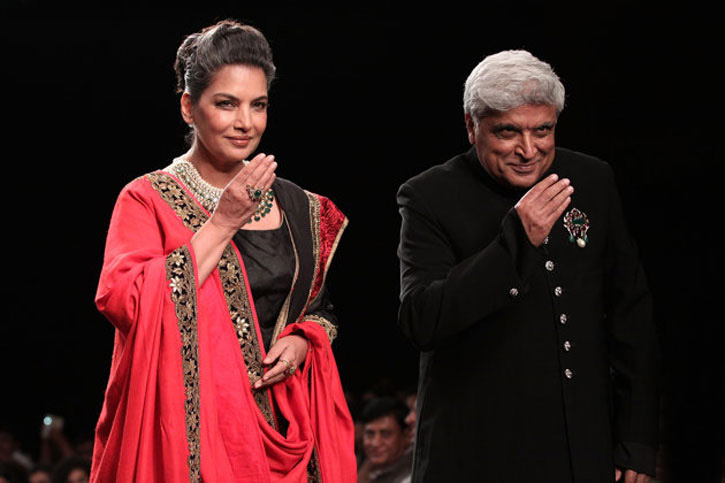 One can only imagine what an evening in the presence of two of the greatest celebrities of the creative world, as we know it, would feel like. Yes, I am talking about the power couple of Bollywood – Javed Akhtar and Shabana Azmi.

A poet, lyricist, leader and crusader who inspires millions with the simplicity of his conduct, Javed Sahab has a charm that can light up an entire room. You would feel his warm presence if he is in the same room as you without even looking at him. How can someone be so simple yet so great, so rooted yet so amazing! On the other hand, Shabana ji embodies substance, femininity, class and versatility. She has not only been a heroine on the screen but also quite a Shero in real life working for various social causes.

Well, I got to be with them for not one but two evenings in a row! And, I will be stating the obvious when I say that it was a dream come true. Though this was not the first time. I had the opportunity to listen to Javed Sahab way back in 2013 during a Media Summit in New Delhi.

No doubt, it was overwhelming, educational and informative but this time it was different. This time, Javed Sahab and Shabana ji were in Singapore for a unique event. They were here to celebrate Literature and love during the Singapore International Festival of Arts (SIFA) 2018. In fact, “Rhymes of Love” was one of the three opening acts for SIFA this year.

The Venue Set The Mood

The recital was organised at one of the most picturesque locations in Singapore, my personal favorite – Victoria Theater and Concert Hall. That place is like an art incubator. Whenever I find myself there, I know I am going to have a good time. During SIFA, it looked even more beautiful. Ablaze with vibrant laser lights,decorated with white canopies and brimming with talents – the entire Old Parliament Street looked like a Broadway set.

The Rain That Did Not Dampen The Evening

The 27th of April was a date anticipated not only by Singaporeans but by various international artists also who had come to the island to for the mega event. It was the opening night of the 42nd edition of SIFA. Well, the weather in Singapore can be completely unpredictable. You may be sweating profusely when you board the MRT and five stations later, you might find yourself looking for an umbrella after getting out!

It was one of those days. The rain seemed absolutely in no mood to stop. However, it did not dampen the spirit of art enthusiasts. I reached the venue half an hour prior to the scheduled start and the hall was full already.

The show began with two introductory AV presentations about each of the guests. It was followed by a brief address from Mr. Gaurav Kripalani – the Director of SIFA. He ended his speech by welcoming the guests of honor.

Draped in a sea blue-green saree exuding elegance in every bit, Shabana ji walked on the stage beaming with a beautiful smile. Her hair was tied up in a neat side bun and was decorated with two lovely red flowers. She came inside holding her hands together in a “namaste”.

By her side, of course, was Javed Akhtar sahab, twinning in a slightly lighter shade of green kurta pyjama with an elegant bandi. He was also smiling as he bowed in “namaste” to the audiences. They were so naturally coordinated and symbiotic together. Decades of togetherness and love was evidently visible in both of them.

People smiled and cheered. I was sitting in the second row and they were directly in front of me. I was already in awe.

Both of them took their places behind respective podiums and when they spoke, a serenity spread in the room. Javed Sahab was to recite his poems in Urdu and Shabana ji was to recite the English translations.

“They say that translating poetry is like pouring perfume from one bottle to another. Some amount of fragrance is bound to be lost. However, the translations that we are doing today have been beautifully done by David Matthews and Ali Husain Mir, and they have kept the soul of the verses intact.”

Javed Sahab smiled and said, “So, here is the perfume, ladies and gentleman!”

I do not remember since when I have been reading Javed Sahab and of course, listening to his lyrics. The evening commenced with the surreal recital of one my favorite poems by him – दुश्वारी… (Dilemma)

It was spellbinding. The beautifully woven words coming out in the velvet voice of the great maestro took me to another world. A world where there was peace, solace and art. A world where love was the source of it all. The next poem that he did for us was मुअम्मा or Riddle. Shabana ji read the English versions with equal drama and panache.

Followed by this was yet another out of this world poem, आसार-ए-क़दीमा/ Remains of The Past. By now, the audiences were smitten, engrossed so deep as if they had forgotten all their worldly worries. Shabana ji decided to take a break by sharing some anecdotes.

She said candidly, “People ask me, your father was a poet, your husband is a poet, do you ever feel like writing poetry. I say to them, No, I provide the inspiration!”

The audience burst in applauds. Javed Sahab continued the recital and this time he presented one of his masterpieces – अजीब किस्सा है/ It’s a Strange Tale. Listen for yourself and feel what I felt.

वक़्त (Time) and आंसू (Teardrop) almost made me cry. I was so deeply involved that even Shabana ji noticed (she told me later on – not indulging in self-flattery here!) The poetry session was concluded with शबाना (Shabana).

After the feast of captivating poetry, it was time for the dessert called conversation. Dr. Rakshanda Jalil, who happens to be an eminent writer herself, moderated this session. From family values to societal issues and understanding love to working out a healthy marriage, they discussed about everything. Javed Sahab also spoke about the recent success of his decade long struggle regarding the Copyrights Amendment Bill in India.

As if I was already not in awe of these two mega stars after the stupendous evening, what followed next blew my mind. Being a journalist, I have had the opportunity to meet with celebs in India and in Singapore many a times. They all put up a good face while they are on the stage or in front of the camera. But, being genuinely so modest, down to earth and interested in other (read ordinary) people (like myself) – this is what Javed Akhtar and Shabana Azmi really are.

They are actually genuine people who care about their fans as much as their fans love them. I got a chance to speak with both of them individually for quite some time and they encouraged me to pursue my dreams. Shabana ji said to me-

“I saw the way you were deep into the recital. I am glad that at such young age you romance the art. You should keep going.”

These words will stay with me forever. I even got my copy of “In Other Words” signed by both of them. That evening was just surreal.

Shabana ji had asked me if I will be coming the second day as well and I had promised her that I will. So, obviously, I went. Today, was even more awesome. Draped in a beautiful yellow saree and adorning a neat side bun, Shabana ji looked yet again like a fairy. Javed Sahab donned the traditional kurta-pyjama-bandi look once again and looked elegant. The poems were spellbinding and there were moments that I will cherish forever. Take look for yourself:

As an icing on the cake, we also got to know stories behind the making of hit numbers like “Ek Ladki Ko Dekho To” and “Ek Do Teen” from Javed Sahab. Knowing about his writing process was an enlightment for me. When someone asked if it was in his genes, he said –

“I don’t know if genetics play a big role in being creative. I am sure the environment helps but honing the skill is entirely upon the individual. Orelse, or stra kids would be stars, right?”

Shabana ji was asked about her versatile roles and the preparartion behind them. She shared the story behind her role as a “Madam” in Mandi. She discussed how she had visited three-four brothels to understand the character better.

Later, I got to speak with Dr. Rakshanda as well. She nudged Shabana ji and said – “She came on both days. Generally aisa hota nahi hai.” I was in awe of their modesty. Of course, I went on both the days. I would have gone everyday even if it would have been a 10-day thing! Dr. Rakshanda asked me about my writing endeavors and plans. We discussed for a bit. “All the best dear”, she said smiling.

I was almost about to cry out of happiness. I spoke with him for 10-15 minutes. He shared anecdotes with me and told me to keep going. Happiness cannot define what I felt that night. It was beyond reality, it was like a dream.

The kind of people that Javed AKhtar and Shabana Azmi are – talented, gifted, extraordinary, humble, polite and giving – Even if half the population became like them, India would easily get rid of many problems at once. We are lucky to be born in an era where such great people are found.

4 thoughts on “When People Are More Than The Ordinary, They Are Javed and Shabana”