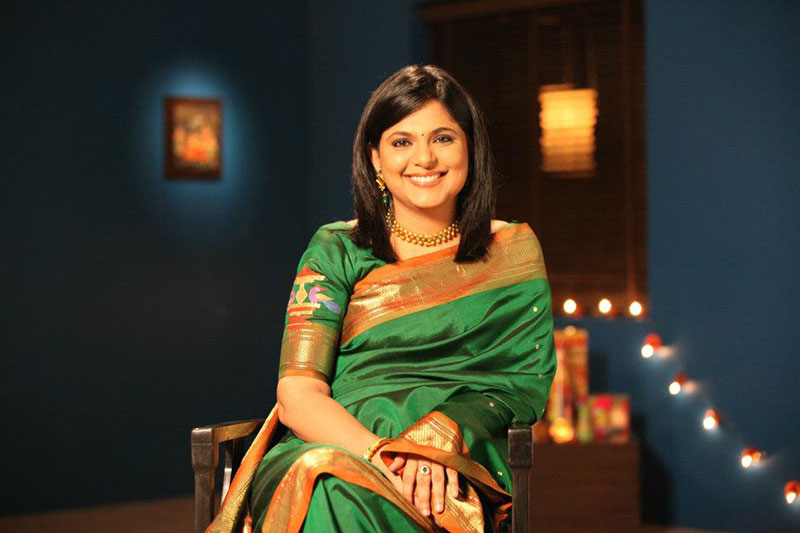 It was 2010. I had just started my pursuit of Journalism and was still in two places in my head. When all my friends were opting for high-paying secure tech degrees, here I was – struggling between college, internships and shows. I knew that my career will not be a “package-oriented ride”. I may not even make any money most of the time but I also knew that I was hungry – hungry for stories to gather and stories to tell.

That led me to a moment when I found myself sitting on the sets of “Zindagi Live” – one of my favorite shows. It was way early in my career and I was extremely nervous. I had been asked to observe and make notes while standing strategically in the corner, out of the frame. This was a Christmas special episode and the shoot was going to be a long one.

The woman, I admired so much was right in front of me. I had been following her since her Zee days. Wearing a royal blue/green churidar suit, looking resplendent and beaming with confidence, she took her position, checked the frame and settled in front of the camera in the exactly right angle. She was strict. She scolded the audiences mumbling among themselves, when they did not listen to the floor manager’s request to maintain silence.

Guests for the day  – Mr. Boman Irani with his beautiful wife Mrs. Zenobia Irani, arrived and the camera rolled. As soon as she got the cue, Richa ji was an altogether different person. I learnt so many things by just observing her. Her ground work was extensive, and research was detailed and in-depth. Even Boman Sir was surprised at some of the clips that she had extracted and some of the people she had found. The way she handled questions, commercials, follow ups and comebacks – it was like watching a painter in action.

Sitting with her spine straight, wearing a smile at all times – Richa Ji was amazing. There were moments when I actually forgot where I was. The conversation was so engrossing that there was pin drop silence in the studio. Every single person was engrossed in the talk. We laughed when they laughed, we cried when they got emotional – it was like experiencing Cinema.

What added to the beauty of that day was watching Mr. Boman Irani so closely. He was such a gentleman, a personification of modesty. After the show, he signed autographs and took pictures with all his fans.

His amazing journey from a waiter to a Bollywood celebrity is commendable. But, what makes this man more special, is the fact that he has not let success enter his head. He is a simple, charming and extremely down-to-earth man. In addition, his wife, Mrs. Irani exudes compassion and patience. She too graciously signed all autographs and took pictures with us.

After the show was over, I got a chance to speak with Richa Ji. She kindly asked me about my goals in life. What she said to me, remains with me till date –

“Do what you want to do with honest dedication. Whatever you do, even if you are writing a blog, be honestly dedicated. And, remember, stories that you tell may not necessarily be a commercial hit but if you are making a place in people’s hearts, your work as a storyteller is done.

I met with her several times after that, on and off studio, during channel visits, internships and shows. Every time we met, she remembered my name and greeted me with a smile. Her basics were just so sorted. Despite being the face of a leading channel at that time, she was so rooted and simple.

Watching her and later listening to her (Dilli Meri Jaan) has made me a better person and (good or bad – is not for me to say but) a content storyteller. Thank you Richa Ji. Keep smiling and keep inspiring 🙂

Some Pictures from the show (Sorry, we did not have good quality cam phones back then)-